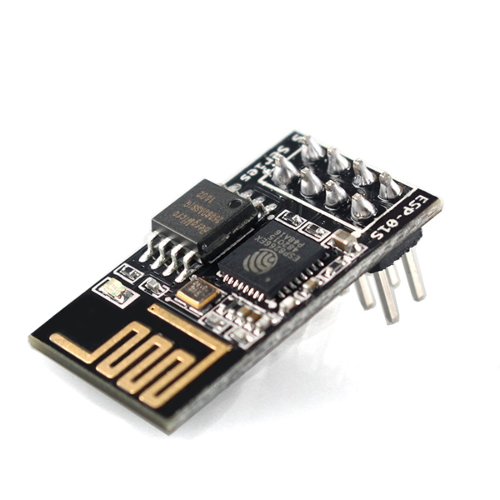 This interesting module is a lot of fun for hobbyists and students who are interested in experimenting with the ESP8266 WiFi chip set. We bought a bunch of these modules, updated the firmware to the much-easier-to-use v0.924 and wrote some Arduino code to grab a webpage.

We do not have a detailed tutorial at this time, this chip set/module is for the curious and adventurous! There’s tons of details and experimentation over at

This module is very low cost, but very simple. It doesn’t support SSL, or communication over SPI – just UART!  It doesn’t have 5V to 3V logic level shifting so you’ll probably want to pick up a logic level sifter, it also doesn’t have a regulator on board and it can use big spikes of 300mA or more current at 3.3V so if using with an Arduino, an external 3V regulator is essential! (Seriously don’t try to power it from the 3.3V power pin the Arduino!) Also, the connector is kind of annoying and not breadboard-friendly, some female-to-male wires can help out in that case to make it easy to plug into a breadboard

That said, it does do the job, and can be used as a UART-at-9600-baud to WIFI adapter using our example code for Arduino or, for the really adventurous, programmed directly using an SDK

– Again, we do not have a detailed tutorial at this time! Right now, we’re offering this for experimenters’ use only – we cannot offer support, returns or refunds for this product.